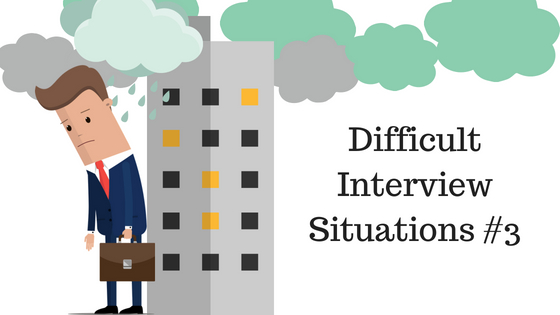 If you’re totally stumped by an interview question, the worst thing you can do is to try to bluff your way through it. If the question is an important one, the interviewer is going to be able to tell you’re bluffing, and that’s not good. Instead, be up-front about it. You’ll come across as having more integrity, and good interviewers will appreciate seeing you handle the situation with grace.

What to say depends on the type of question you were asked. If it’s a question about your knowledge of something, acknowledge that you don’t know and then talk about how you’d go about finding the answer:

“Hmmm, you know, I actually don’t know the answer to that! When I’ve encountered similar things in the past, I’ve done X and Y and that usually gets me pointed in the right direction.”

On the other hand, if the question is more along the lines of “Tell me about a time when you had to do X” and you can’t think of a good example to share, just be honest about that. Then, ideally, you’d either share an example of something related although not identical or talk about how you think you’d approach the situation if it occurred. For example:

“It’s a good question. I’m having trouble thinking of a time when I’ve encountered that at work. But if it did come up, I’d approach it this way …”

You think you botched the interview.

Walking out of an interview knowing that you failed it is a terrible feeling! And it might make you wonder if there’s any way to get a do-over or otherwise acknowledge to the interviewer that you know you weren’t at your best.

For what it’s worth, I’ve talked to a lot of people who thought they botched the answers to a question or two and still ended up getting the job. Some questions don’t matter nearly as much as others, and sometimes people’s self-assessments are just off.

But if you’re convinced your interview was a fiasco, you have a few different options for how to handle it.

If you feel like you just messed up on a question or two, as opposed to the entire interview, you could send the interviewer a thank-you note that reiterates your interest in the job and says something like this:

“I realized after we spoke that when you asked me about X, I should have said ____. I realized I’d misunderstood the question afterwards and wanted to correct it!”

If the issue is that the interviewer asked a lot of questions in an area you’re not as strong in, you could say something like this in your thank-you note:

“I want to be up-front about the fact that I don’t have a lot of experience X, although I do think that my background in Y would be really useful in helping you achieve Z.” (But keep in mind that if they’re really looking for serious experience in X, this may not be a job you’ll succeed in — which means it’s a job you don’t want.)

If you were just having an off day (didn’t sleep the night before, dealing with bad personal news, recovering from illness, etc.), and you’re sure it impacted you in ways the interviewer picked up on, you can say something like this:

“I want to be transparent that I wasn’t at my best when we spoke, due to a relatively sleepless night the night before. If we have the chance to talk again, I hope you’ll see the difference!” (But do be sure that the interviewer would have picked up on it before saying this, since if they didn’t, this can be a surprising note to receive.)

Will any of this make a difference? Maybe, maybe not. It really depends on the interviewer’s assessment, what they care about most and what they’re de-prioritizing, and what the rest of the candidate pool is like. But it’s worth a shot.

Rick Christensen: Director, Career Transition Practice Rick has been a career consultant for over 25 years, serving a very broad-based and diverse clientele. His specialties include effective group facilitation, one-on-one coaching and consultation at all levels including senior executives.

7½ Questions to Ask in an Interview

An interview is a two-way street. Superior candidates have been skipped because they didn’t ask good questions in the interview.

Outplacement is one of the most misunderstood benefits. There are several misconceptions that are common. Most are based on assumptions…